Reality docu-series where
a “diverse” cast of 13 people struggle to
make it out of city of brotherly love
while forming a jean line company!

Makin’ IT is not about who you know, but what everyday people do! 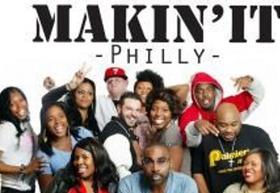 Can you believe that the city of brotherly love finally has an independently produced reality TV show aimed at building businesses? Because of the overwhelming praise and support from sponsors, contributors, show-goers, and fans, we are pleased to announce, "Makin' It Philly!"

"Makin' It Philly" is independently produced and the first of its kind to show a cast of 13 people of diverse backgrounds building businesses together in the city of Philadelphia, P.A. The show was conceptualized to display the trials of how African Americans entrepreneurs are the target of their peers and how those living in the city of Philadelphia during an economic decline can have struggles, but still can make it in business. The show has all the flavor and juiciness of modern day reality TV, but gives an overall positive message of inspiration and hope to those that despite their situational walks of life they can still make it. "I wanted to be able to show the world that you can make it. All my life I had to prove to those that I was going to be successful. When I started the Lindler Consulting Group no one believed in me, but sometimes you have to prove a point and this show is not about me. It's bigger than me. It's about everyday people like me that want to keep the dream alive," says Akilah Lindler, a Lindler Consulting Group Executive and cast member. The dream is referred to as the hopes African Americans have in what Dr. Martin Luther King stood for in terms of equality.

"Makin' It Philly" is executively Produced by Akilah Lindler and Co-Produced by Senetra Weaver and Victor Sanders. The project is directed by Alvin Nyemah and Anson Nyemah.